A man intentionally crashed his SUV into a home in East Redding after he reportedly tried to light the house on fire early Tuesday morning, according to Redding Police. Officers were called to a home in the 3500 block a Capricorn Way at about 12:54AM. A 911 caller reported that 27-year-old Cody Bugarin kicked in the front door of the home and began pouring gasoline inside the home before he tried to light it on fire. The caller said that after an altercation with several of the residents he fled in a Honda Pilot SUV. An officer spotted the vehicle nearby, and after Bugarin saw the officers patrol vehicle, he drove back towards the home and drove his SUV into the front of the home he just left. Bugarin than fled back into the home and refused to come out. After a short standoff he was taken into custody and booked into Shasta County Jail. 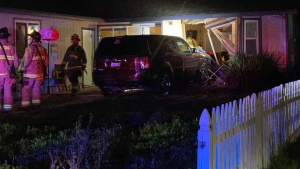